Poland's Szczesny: I lost €100 bet with Messi over penalty 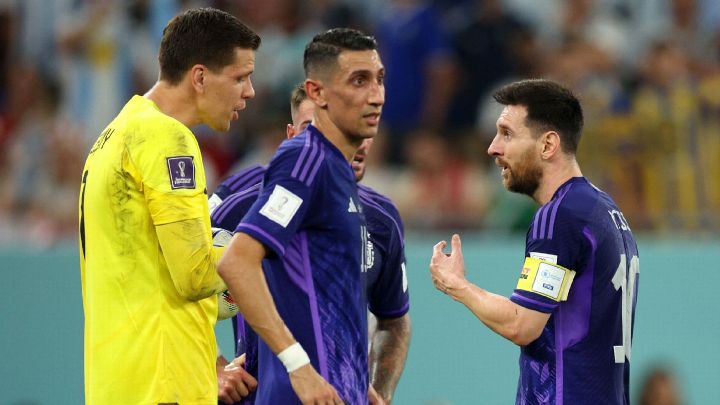 DOHA, Qatar -- Poland goalkeeper Wojciech Szczesny has said that he lost a €100 bet with Lionel Messi before the Argentina forward missed a penalty during his team's 2-0 World Cup win at Stadium 974 in Qatar.

Goals from Alexis Mac Allister and Julian Alvarez were enough to seal victory and the top spot in Group C for the 2021 Copa America winners, who will now face Australia in the round of 16 on Saturday.

Poland also made it into the knockout stages, despite losing to Argentina, edging out Mexico on goal difference to book a tie with reigning world champions France on Sunday.

Szczesny's penalty save from Messi would ultimately prove crucial for Poland in the goal difference battle with Mexico, but the decision by referee Danny Makkelie to award the spot kick surprised the Juventus goalkeeper, who was judged to have caught Messi in the face with his arm while collecting an aerial ball.

Makkelie reviewed the incident on VAR before awarding the penalty, and Szczesny said he was so convinced that the referee would reject the penalty claims that he made a bet with Messi.

"We spoke before the penalty, and I told [him I] would bet him €100 that he [referee] wasn't going to give it," Szczesny told TV2. "So I've lost a bet against Messi.

For Szczesny, it was his second penalty save of the World Cup after denying Salem Al-Dawsari in Poland's 2-0 victory over Saudi Arabia on Saturday.

"I was fortunate twice this competition," he told RAI Sport. "It's a great moment in the career of a player, the World Cup is the maximum and this is special.

"There's a bit of work that goes into it, too, but in order to save a Messi penalty, you need some luck as well."

Messi's failure from the penalty spot denied him the chance to move level with Marcus Rashford, Kylian Mbappe, Cody Gakpo and Enner Valencia on three goals in the race for the World Cup Golden Boot.

The Paris Saint-Germain star is on two goals after scoring a penalty against Saudi Arabia and another goal against Mexico.