ISL musings: Ogbeche the legend, Chhetri the record-scorer as COVID continues to be a game wrecker 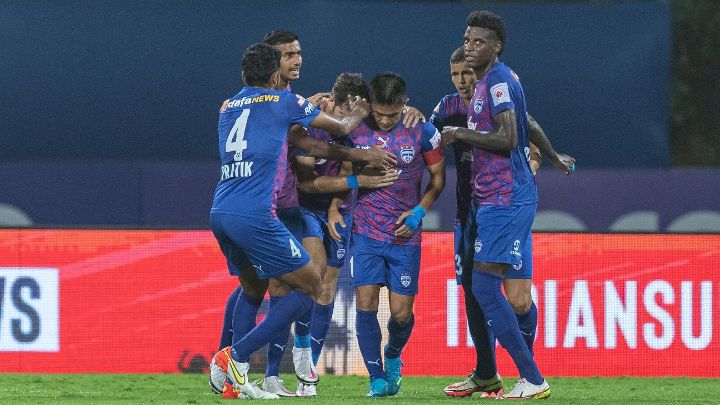 After 65 games in, the Indian Super League has crossed the 200 goal mark this season, far quicker than the 87 games it took last year. After a week where COVID made its presence known in Goa and more devastatingly in Mumbai, here's what we learned from the action on the pitch:

Bart Ogbeche is an ISL legend

Only Bart Ogbeche can play in a support striker/No.10 role for much of the game and score a classic, opportunistic No.9 hat-trick.

Only Bart Ogbeche can start the season 12 goals behind Sunil Chhetri and 13 behind all-time leading goalscorer Coro, and now be a goal behind the pair.

Manolo Marquez has a bonafide legend to lead Hyderabad FC to the title, and with his Indian talents like Aniket Jadhav absolutely thriving, things are looking rosy for the table-toppers.

Sunil Chhetri serves us a reminder

A delicious pie we're only too glad to eat, by the way, as Sunil Chhetri marked his return to the Bengaluru FC starting lineup after ages with a well-taken goal. Bengaluru FC were not looking too great against FC Goa on the hour mark, only for Chhetri to drag them back into the game with a bullet header.

The celebrations that followed him joining Coro as the ISL's all-time leading goalscorer with 48 goals were muted, with Chhetri all too focused on obtaining the three points. He very nearly did, a late left-footed curler from the edge of the box striking the crossbar. We were robbed of the perfect redemption story, but Chhetri did remind the entire league that the fire still burns brightly within. Captain. Leader. Legend.

East Bengal end their drought, but the joy is tempered

Naorem Mahesh's brace proved crucial as Mario Rivera began his era in winning fashion. However, for a team that's only won 4 of its 33 games over two ISL seasons, there's a long road back to the top.

Off the pitch, there was tragic news as Indian football legend Subhash Bhowmick, passed away. The ISL had a few brickbats thrown their way on social media for not observing a minute's silence in ATK Mohun Bagan's game, but SC East Bengal did mark his passing with a minute's silence ahead of their game against Hyderabad.

Covid continues to make itself known

ATK Mohun Bagan were cleared to play, but looked decidedly not ready, with coach Juan Ferrando admitting as much, saying ""We could only have two training sessions. Some players were out of their quarantine for only 24 hours."

ATKMB were all over Odisha in the first half, but lacked sharpness. The second half was telling however as they simply ran out of steam, barely managing a shot on goal as the game finished goalless. Other teams affected with Covid might do well to learn from ATKMB and perhaps rotate.

Amidst all the doom and gloom of NorthEast United's season, there were shoots of hope as Marcelinho made his first appearance for the club in the 1-2 loss to Chennaiyin. The Brazilian instantly looked like the player of yore, who has 33 goals and 18 assists in the ISL. In just 26 minutes on the pitch, Marcelinho created 3 chances, more than any other player in the whole game. Class is permanent, and all that, eh?

Chennaiyin and Odisha remain in the hunt

Chennaiyin might be fourth and Odisha sixth, but the pair are only two and three points behind Hyderabad in first place, respectively.

As for Odisha, there was a heartwarming moment in their 2-0 win over NorthEast, with Daniel scoring his first goal in the league since Feb 14, 2021. He's not been afforded too many chances to be fair, racking up only 129 minutes in 4 appearances this season. Meanwhile, Odisha remain inconsistent as ever, blowing hot and cold, with last week being the first time they've gone two games without a loss since the start of the season.

Ronaldo is first man to score at 5 World Cups

Fernandes urges Ronaldo critics to keep it up

Bruno Fernandes said he hopes there will be more criticism of Cristiano Ronaldo because it gets the best out of the Portugal striker.

The Welsh federation said FIFA has offered assurances that fans wearing rainbow symbols will be allowed at Friday's World Cup game against Iran.

Adams: Win vs. England would help sport in US

Tyler Adams says that beating England at the World Cup would 'fast-track' the impact the USMNT can have on the sport in the US.

Manchester United's owners, the Glazer family, are looking for a world record price if they are to sell the club, sources have told ESPN.

Jurgen Klopp is in line to take on more responsibility for Liverpool's player recruitment next summer, sources have told ESPN.

Gareth Southgate has not ruled out the prospect of England making a gesture to replace the aborted "OneLove" armband.

EU calls on FIFA to help families of dead workers

The EU parliament on Thursday voted in favour of a resolution that calls on FIFA to help compensate the families of the migrant workers who died.