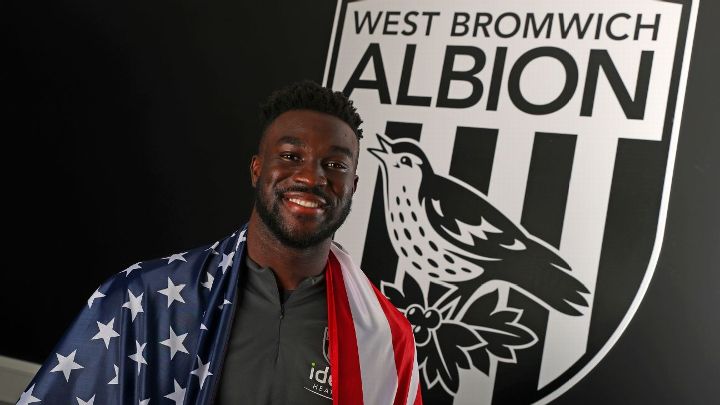 Just under eight months after leaving England, USMNT striker Daryl Dike is back in the UK after signing a four and a half year, $9.5 million contract with West Bromwich Albion.

It is familiar territory for the young Nigerian-American, who spent four months on loan at Barnsley in his previous spell, and in the same division that he returns to from Major League Soccer side Orlando City.

Like the last time, the objective is the same at WBA: To secure promotion to the Premier League.

He came close last time, scoring nine goals from 19 appearances to heave the Tykes from 13th to 5th place and into the Playoffs, where they lost narrowly to Swansea.

Dike told ESPN how that experience shaped him and prepared him, not just for making an impact at international level, but for his return to England.

"Going to England was a huge experience for me," he said. "Because growing up as a kid in America, you watch English football, whether it be the Premier League or the Championship.

"Luckily, I was put in a good situation where I had a great coach, I had a great staff around me, and, of course, a quality team to drive me, to push me to do better.

"And with the team, starting at 13th, and driving all the way to playoffs and, us doing collectively well, it was a big experience for me."

"Just in the four months I was there, I learnt so much and it's something that I used as another building block to bring back with the national team, with MLS and, this next step that I come into in my career.

"I believe it was very, very important for me to go and witness that rather than seeing it on TV."

Although he did not score in the playoff semifinals as Barnsley were eliminated, the forward had done enough that the club wanted to exercise their purchase option to sign him, but failure to make the Premier League meant they could not afford to meet the reported $20 million asking price.

That may have turned out to be a blessing in disguise, as Valerien Ismael had also left the club. Dike now finds himself returning to work for the same manager under whom he was so productive, again with a genuine chance to make it to the top flight.

"It was an easy decision when I heard about the club's interest in me," Dike said. "It's always been in my head to be over here in England.

"Growing up I have always dreamed of playing here, especially at a club like this with history, the manager and the opportunity to go up to the Premier League. There were so many different factors for me that made the decision a lot easier."

Playing under a coach with whom he is already familiar was an important part of that process: "When I was at Barnsley last season, we did really well and the boss was a big part of that. I feel as though he brings the best out in players.

"It's important for me to go into a club which has a coach I have already worked with and I know the system we are going to play.

"He seems to like me and I like him too. Having that knowledge when you go to a place which at first is a little unfamiliar, it's great to have."

Ismael was just as delighted to have his former player return, saying at the time of the transfer: "I'm delighted we have completed the transfer of Dike. He was always our first target and priority.

"I worked with him at Barnsley and I know him very well. He has the mentality. He is 21 years old and is still a young player, but he has a lot of experience."

Those goals and experience will be sorely needed as the Baggies navigate their way through the business end of the season. West Brom have struggled for goals in recent weeks despite their early season success.

They have only scored seven in their last 10 matches, hitting blanks in five of those games.

The more he can do that, the more likely it would be that the Baggies eventually make it back to the Premier League, where Dike would have to go up against a club that he supported as a kid.

For now, though, the immediate goal is simple: "The Premier League is within reach and having that drive and that goal will push me to become a better player and achieve those goals at the end of the year."