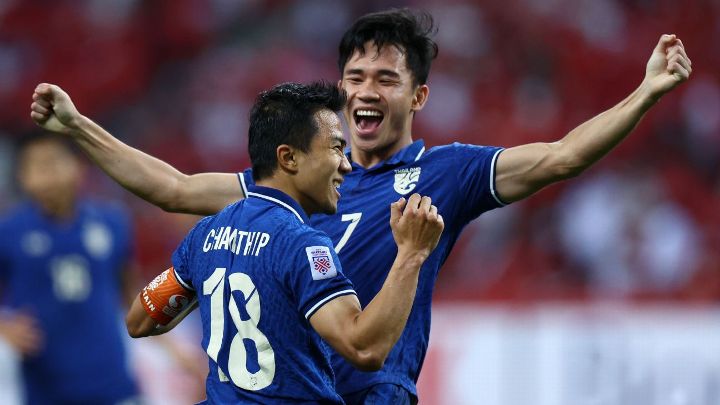 Thailand's charge to a record-extending 6th AFF crown was fueled by several standouts. While captain Chanathip Songkrasin was named the tournament's Most Valuable Player for the third time in four editions, it was not just the usual suspects that shone.

Having surpassed expectations to reach the final with a young and exciting side, Indonesia boasted a handful of players that rose to prominence. Semifinalists Singapore and Vietnam also had a fair share of stars who can lay claim to being among the tournament's best.

Here, we pick our Team of the Tournament from AFF Suzuki Cup 2020.

His tournament may have ended prematurely when he became the third Singapore player to be sent off in the semifinal loss to Indonesia, but the Lions might already have been dead and buried if not for the heroics of Hassan Sunny.

The veteran rolled back the years with a string of outstanding stops in that match and was a reassuring presence between the posts for Singapore throughout. His 20 saves was the most of any goalkeeper at the tournament.

A former Suzuki Cup winner in 2014, Narubadin provided one of the feel-good stories of the tournament as he helped Thailand reclaim their status as kings of Southeast Asia after overcoming a wretched run with injuries in recent years that saw him miss the previous two editions.

Relatively unheard of outside Indonesia before the tournament, Alfeandra Dewangga is one of the reasons why the future looks bright for Indonesian football despite them coming up short once again in their quest to end a 25-year wait to win the Suzuki Cup.

Still only 20, Dewangga's versatility also saw him being deployed in midfield but it is arguably in defence where he is most natural. His tournament-high 33 clearances illustrate his uncanny knack to sniff out danger.

The aforementioned Theerathon could easily have made the cut but, considering his status as former two-time winner of the competition who spent the past four years plying his trade in Japan, his impressive displays were to be expected.

Featuring in a team that look to push forward at every opportunity means that the players tasked with the defensive duties often have to go above and beyond, although that hardly fazed Thailand anchor Phitiwat Sukjitthammakul.

Described as a "warrior" by Thailand coach Alexandre Polking, Phitiwat's experience of playing in the AFC Champions League with Chiangrai United showed in his composed and assured displays. As the base of the midfield diamond he grounded the War Elephants when they adopted a 4-1-2-1-2 formation in the earlier stages of the campaign.

Vietnam may have come up short in their quest to defend the title they won in 2018, but it was not for lack of trying from midfield general Nguyen Hoang Duc.

With all eyes on talismanic playmaker Nguyen Quang Hai, it was instead Hoang Duc who ran the show mostly for the Vietnamese with his tidy distribution and non-stop running, as he narrowly pips Singapore's Shahdan Sulaiman to the second central midfield berth.

Another young Indonesian that should go on to be a pivotal figure in his team's future prospects, the excitement that Witan Sulaeman generated every time he had the ball at his feet showed just why he is already playing in Europe with Polish outfit Lechia Gdansk.

Witan's blend of pace and skill made him a nightmare for defenders. He could easily go on to form a devastating double act with fellow starlet Egy Maulana up front for Garuda.

On paper, Supachok Sarachat either played on the right wing or up front in a two-man attack but his movement and versatility meant he was often wreaking havoc all over the park. Also, his irrepressible displays made him impossible to ignore, which is why he earns a spot in this team on the left wing.

Teerasil Dangda may have had more complete campaigns in his time featuring in the Suzuki Cup, but the recently-concluded tournament will always go down as the edition when he became the competition's all-time top scorer with 19 goals.

Like Chanathip, Teerasil's experience and class came to the fore when it really mattered, with braces against Myanmar and Philippines sending the War Elephants on their way to what proved to be crucial group-stage victories.

Considering he was only handed the reins in September, Alexandre Polking deserves a lot of credit for leading Thailand to regional glory once again.

Granted, he has a talented squad of players to work with but he displayed the greatest tactical nous and versatility of all the coaches at the tournament. He changed his system to counter specific opponents and displayed a defensive aspect to his game plan to complement some breathtaking, attacking football the Thais played under him.