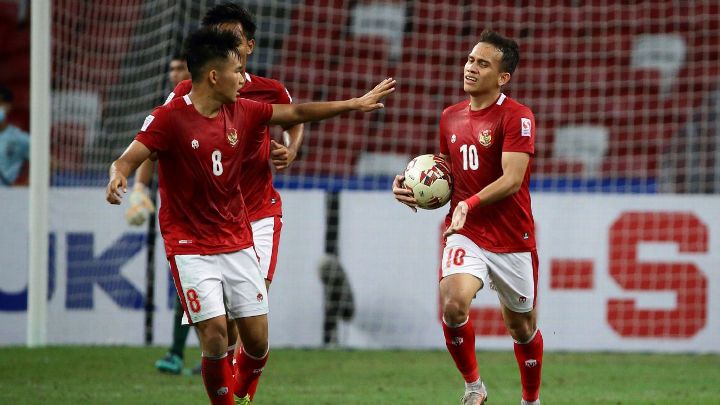 For the 6th time in the AFF Suzuki Cup's 25-year history, Indonesia once again came up just short in their quest to be crowned champions of Southeast Asia.

Having finished runners-up in 2000, 2002, 2004, 2010 and 2016 previously, the Indonesians were once again defeated finalists at the delayed 2020 edition after Saturday's 2-2 draw with Thailand in the second leg of the final saw them lose the decider 6-2 on aggregate.

- Don't miss The John Dykes Show, with all new episodes each Friday on Disney+ Hotstar. Click here to join the conversation!

Firstly, the Indonesians were initially not even expected to get out of the group stage having been drawn alongside Vietnam and Malaysia, the champions and runners-up of the last edition, yet not only managed to qualify for the knockout stage but did so in top spot.

Their enterprising displays throughout the competition, which were at times a breath of fresh air, was fuelled by a young but fearless squad with an average age of just 23.8 years.

20-year-olds Pratama Arhan and Alfeandra Dewangga both emerged among the best defenders of the tournament and already garnering interest from clubs abroad, which could see them follow in the footsteps of South Korea-based Asnawi Mangkualam or even Witan Sulaeman and Egy Maulana, who are currently playing in Poland and Slovakia respectively.

Lechia Gdansk attacker Witan certainly lit up the tournament with his electric displays in the final third, and despite only being available for Indonesia's final three games following a belated arrival, Egy still managed to live up to his hype by notching two goals.

It is precisely these players that give Indonesia coach Shin Tae-yong optimism that his team can soon go from dark horses to genuine contenders in the near future.

"The lack of experience of our young boys was display clearly in the first leg of the final but I think they played quite well tonight and put up a good fight," said Shin, after Saturday's second leg.

"With this experience, we will do our best to achieve even better things, with more tournaments to come in 2022. If we continue to experience such tournaments, I strongly believe we won't just be dark horses but one of the championship contenders."

Despite the plethora of exciting youngsters at Shin's disposal, he did highlight the striker role as a potential cause for concern, especially given most of Indonesia's Liga 1 clubs often fill that position with import signings.

Twice in the tournament, Shin brought on a striker as a substitute only to replace them later on in the contest, with Ezra Walian suffering that fate in the semifinals before the South Korean tactician made a similar move with Hanis Saghara on Saturday.

"That fact that most Indonesian clubs have foreign players as their strikers makes it difficult for domestic players in that position to grow," added Shin.

Yet, for a team who seemingly have a major issue in the attacking department, they still managed to finish the tournament as top scorers with 20 goals from eight matches.

With their bright prospects shining all over the rest of the park, the future already looks exceedingly bright for Indonesia based on their displays over the past month.

And things could get even better if they manage to unearth a striker to complement the likes of Egy, Witan, Arhan and Alfeandra.