Could Finidi George's unbeaten start at Enyimba put him in line for the Nigeria job? 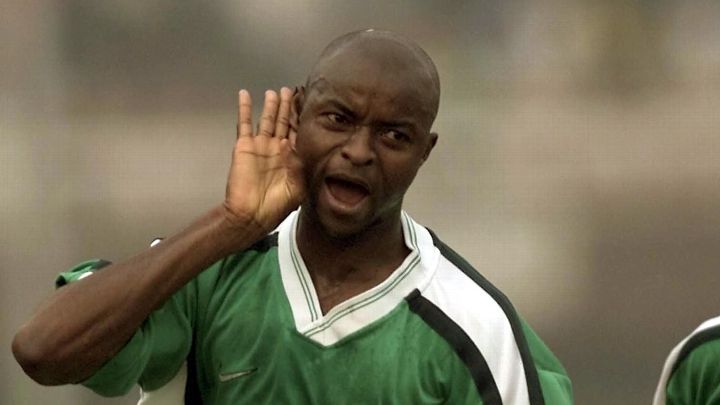 Former Ajax and Ipswich star Finidi George has got off to quite the spectacular coaching start at Enyimba, which could see him fast-tracked to the Super Eagles job in the wake of Gernot Rohr's sacking.

Nigeria Professional Football League side Enyimba have an impressive record under George, who has put himself in the running for the national team gig: Three games, three wins, six goals for, none against in little over two months on the job.

The NPFL has not yet started its season, so all three of those wins have come in continental competition, without the benefit of league play that helps teams prepare and get match fit for continental exertions.

As small a sample size as these early results are, they have put the former Super Eagle firmly in the conversation for the Nigeria job, which has Augustine Eguavoen in temporary charge, despite previous disappointments in his attempts to coach the youth teams.

"We wanted him to take the Enyimba job first to prepare him to be Super Eagles coach in the future," a top NFF source told ESPN.

"But he is already doing so well now that if he continues like this till the end of the season, who knows what might happen?"

If that were to happen, it would be a fitting answer to the disappointment that George faced when he twice applied to coach Nigeria's cadet teams and was twice rebuffed.

But the 50-year-old is not allowing himself to dwell on those rejections, telling ESPN: "I'm not thinking about that. That was back then, I applied for the job and I didn't get it. So, no regrets whatsoever.

"My focus now is to see how I can do my best here in Enyimba and see how we can get back to the top.

"It is a very big club, and I think they have to come back to where they belong. So, I hope with my staff we will be able to do that and bring back the club to the past glory days they always had. That's my focus now."

Finidi was appointed coach of Enyimba in September, replacing the Fatai Osho. With the league still on break, his first assignment was straight into the cauldron of CAF competition.

The former Nigeria international began his tenure by guiding the People's Elephants to a 1-0 road win over Senegal's Diambar FC in the second round often CAF Confederation Cup. They followed that up with a 3-0 home victory in the second leg to complete a 4-0 aggregate win and move on to the final round of qualification for the group phase of the competition.

Finidi had less than one month of training time with the team prior to that first game. It was a phenomenal start to life at the helm of one of Nigeria's biggest clubs, one that creates a pressure cooker experience for coaches.

"I know there's a lot of expectation and a lot of weight on my shoulders and I know a lot is expected of me," he added.

"That is why I don't want to talk much. I just want to do the work, try to see how the team can blend very well as quickly as possible so that by the time we start playing, it will be seen that the team is well coached.

"That is my desire and I hope by the end of the season, we'll be able to get the result that we all are hungry for and then we can all celebrate."

In early December, George masterminded a 2-0 home win over Libya's Al Ittihad, to put one foot into the group stage. The result was made even more significant because of the gruelling experience George and his wards went through ahead of the game.

The club found themselves in the rare, and possible previously unheard of position of having to play the second leg of their fixture before the first leg, as a result of venue and travel complications.

It was a performance that cemented Finidi's solid but expansive attacking style, and has the club looking good ahead of the 'first' leg, and a charge for the title.

Finidi has certainly made an impression in Aba, according to forward Victor Mbaoma. "He has been educating us," the striker told ESPN.

"It is not just playing football alone. He helps us understand the game and makes everyone a coach so this has raised our awareness and commitment.

"He has been able to make us see football differently and has made us see reasons we must play with intelligence.

"He is a very open person and we all love to be around him. During football games we see him as a coach, but he has made himself a father and a brother to us.

"As a group, we are having very high hopes and it's because we don't just have a coach but a teacher; so we foresee a very bright season."

Success, of course will be measured in trophies. Enyimba have won the CAF Champions League twice, won the Nigerian league title eight times, and the FA Cup 4 times.

George himself is no stranger to lifting trophies. As a player, he was part of Nigeria's famed Class of '94 which won the Africa Cup of Nations, and he is also a Dutch Eredivisie and UEFA Champions League winner with Ajax Amsterdam in 1995.

Finidi will also face some pressure from his fellow coaches in the league. Imama Amapakabo and Kennedy Boboye, who are both from Rivers State like George, and also grew up in the city of Port Harcourt just like the 50-year-old, have both won the league title.

Imama helped Rangers break a three-decade title drought, while Boboye led Akwa United to the championship last term. Finidi admits that it puts some additional weight on his shoulders.

"Of course, I admire what they have done," he admitted. "Boboye, Imama, they've done so well. I must commend them but at the same time, I'm just going to be focusing on why I'm here, I'm not going to look at anything else because that now puts extra pressure on me.

"I'm not going to look at what they've done. What they've achieved is there already so I'm just going to be focusing on what I'm capable of doing. And then try to work with players and make sure that we have the results.

Amapakabo, who is currently coach of Abia Warriors, told ESPN he was open to giving advice if needed: "I know he is new to the league and there may be some things he may need help with.

"I am here to offer any advice if he needs it. We want him to do well and to succeed."

The NPFL season begins on December 17. But before that, there is the matter of negotiating the delayed first leg of that Confederation Cup fixture against Al Ittihad, to be played that same weekend in Libya.

FIFA opened a second investigation on Thursday into potentially discriminatory chants heard from Mexico fans during their 2-1 win over Saudi Arabia.

Luis Suarez said he won't apologise for the controversial handball incident which denied Ghana a place in the 2010 World Cup semifinals.

Rice: Other nations should fear England at WC

Declan Rice believes other nations should fear England and said they are aiming to give the country a Christmas present by winning the World Cup.