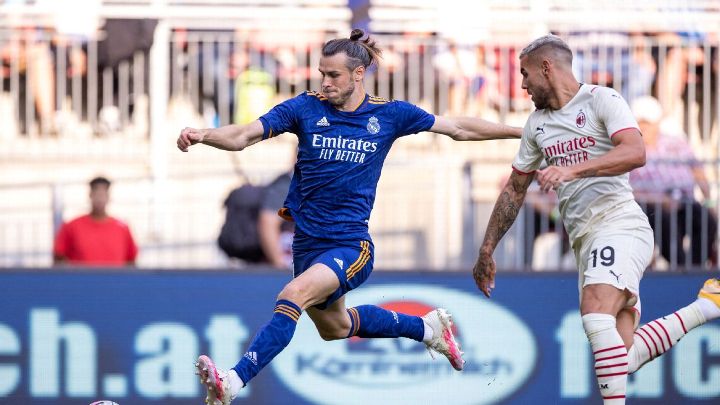 Gareth Bale missed a penalty while David Alaba made his Real Madrid debut in their preseason goalless draw against AC Milan on Sunday in Austria.

Alaba made his first appearance for Carlo Ancelotti's side since moving on a free transfer from Bayern Munich this summer. Madrid's only summer signing, the versatile Austrian played the first half against the Rossoneri and said:

"It has been very positive to play my first game with Real Madrid and in front of my home fans. The secret has been this team. I feel comfortable in this team.

"From the first day I've had a great reception. I'm trying to improve the team with my qualities and help."

Bale, who appeared with the No. 50, played his first game for the Spanish giants since June 2020 after spending last season on loan at Tottenham.

The Wales international made a stunning return to action when he earned a first-half penalty after Davide Calabria brought him down inside the penalty area.

However, Bale's weak spot kick was saved by goalkeeper Mike Maignan and the forward was substituted at half time as well as Alaba.

Thibaut Courtois and Luka Modric also made their first preseason appearances for the club after returning from their break following Euro 2020.

Modric came close to breaking the deadlock when he struck the bar in the second half but Madrid failed to find a breakthrough against the Italian side.

Madrid kickoff their LaLiga season with a trip to Alaves on Aug. 14 while Milan begin the Serie A campaign a week later with an away game at Sampdoria on Aug 23.