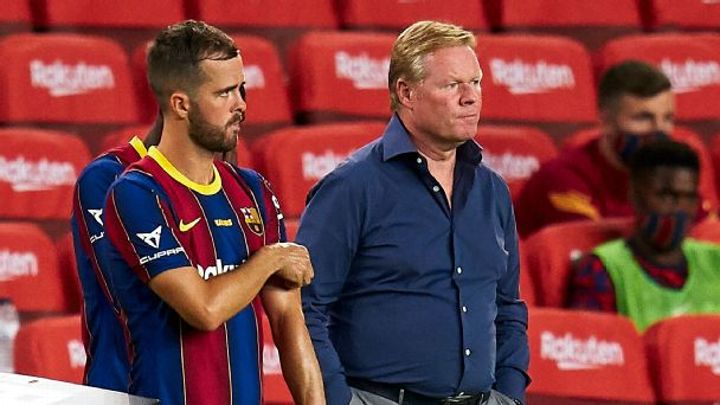 Former Barcelona midfielder Miralem Pjanic has slammed Ronald Koeman's tenure at the Camp Nou, claiming that his training sessions lacked ideas and did not include any tactical work.

Pjanic made 30 appearances in his only full season at under Koeman in 2020-21, although the majority of his outings were as a substitute.

The 32-year-old then spent last season on loan at Turkish side Besiktas before joining Sharjah FC on a permanent basis last month.

"I was very surprised in training with Koeman," Pjanic told Cadena Ser on Friday. "There was no intensity, no tactics, no ideas. We did not prepare for the games."

Koeman was sacked last October and replaced by club legend Xavi Hernandez. Pjanic only worked under Xavi briefly this summer, but said training has improved massively.

"Preparation and training was good under Xavi, similar to what I was used to at Juventus, for example, where we won everything," Pjanic added.

"Now the sessions at Barca have a lot of intensity. Xavi and his staff were very clear with us at the start of the season. They told us this year we would have to run and go 2000 miles per hour.

"Every day is like a game in training at Barcelona now, because there is so much quality in the squad and a lot of intensity."

It is not the first time Pjanic, who joined Barca from Juventus in 2020, has taken aim at Koeman, who will replace Louis van Gaal as Netherlands boss after the upcoming World Cup.

Following his move to Besiktas on a season-long loan last September, he was also critical of his time working under Koeman.

"Koeman disrespected me," he told Marca. "He never talked to me. I am a player who can take anything, but I want to be told to my face and not [treated] as if I am a 15-year-old."

In the same interview, Pjanic also expressed his surprise that Koeman would never watch training sessions the day after a game, when those that had not played the previous day would train and, in theory, have a chance to play their way into the team.

Pjanic returned to Barca from his loan spell at Besiktas at the start of the summer but left the club on a permanent basis in September, joining Sharjah FC in the United Arab Emirates.

Xavi had been keen to keep the Bosnia international around as an understudy to Sergio Busquets, but he preferred to make the move in search of guaranteed playing time.