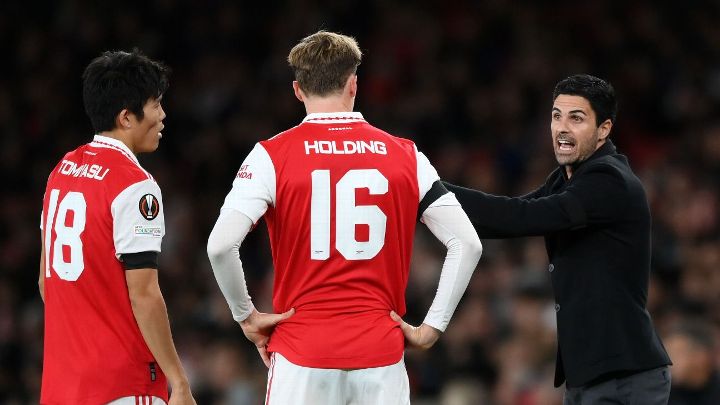 Arsenal may be leading the Premier League but they still have plenty of room for improvement, Mikel Arteta has said ahead of a test of their credentials against Liverpool on Sunday.

The north London side have won seven out of eight games so far and head into the weekend a point clear of champions Manchester City, who host Southampton on Saturday.

Liverpool, champions in 2019-20 and runners-up last season, are ninth with only two wins from seven matches ahead of the game at the Emirates Stadium. They won 2-0 there last time around in March.

"It is a really exciting game to play against one of the top opponents in this league," Arteta told a news conference on Friday. "It's going to be a really demanding match that's going to require us to be at our best again.

"It's a fixture that everybody is looking for against an opponent that has shown in the last five or six years the level they have and we have to show that we have raised the level and are ready to compete against them."

Arsenal are unbeaten at home in the league, their sole defeat coming at Manchester United last month, and Arteta said he was proud of the change in atmosphere at the club.

"How you measure success is lifting trophies, but as well you have to understand where we were and how fractured the club and the environment looked," he said.

"I am very conscious that we can get much better than what we are today... we have to do better to be the team that we want to be and the challenge now is to do it every three days.

"You always see the weaknesses that you want to improve."

Qatar have suffered the earliest exit by a host nation in the World Cup's 92-year history after losing their opening two matches.

Enner Valencia scored Ecuador's goal in the 1-1 draw against the Netherlands before being stretchered off the field after a knee injury.

Martino to do 'everything possible' to KO Messi

Mexico coach Gerardo "Tata" Martino said he would do "everything possible" to knock out home country Argentina and Lionel Messi from the World Cup,

Pro-government fans harassed anti-government supporters outside the stadium in Qatar before Iran's World Cup clash with Wales on Friday.