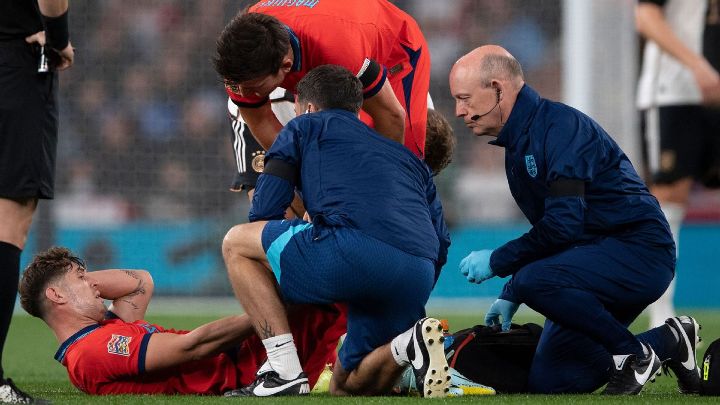 Manchester City are sweating on the fitness of John Stones ahead of the Manchester derby after the defender picked up an injury on international duty.

Stones was forced off during the first half of England's 3-3 draw with Germany at Wembley on Monday night with a hamstring problem.

Stones, 28, was expected back at City's CFA training base on Wednesday to be assessed by the club's medical staff.

He is likely to undergo a scan before a decision is made on his availability for Manchester United's trip to the Etihad Stadium on Sunday.

Stones has started City's last two games at right-back in the absence of Kyle Walker. Walker hasn't played for City since the 1-1 draw with Aston Villa on Sept. 3 but featured for England against Germany and should be fit to face United.

Meanwhile, City are satisfied that Kalvin Phillips' surgery to correct a shoulder problem was successful.

Phillips had the operation early this week after picking up the problem in training ahead of the trip to Wolves.

Phillips, 26, signed from Leeds United in the summer before withdrawing from the England squad for the Nations League games against Italy and Germany and is a doubt for the World Cup, which starts in Qatar in November. Sources have told ESPN there is no timescale yet for Phillips' return to action.

Gareth Southgate is set to name his squad for the World Cup on Oct. 20 with England kicking off their tournament against Iran on Nov. 12.