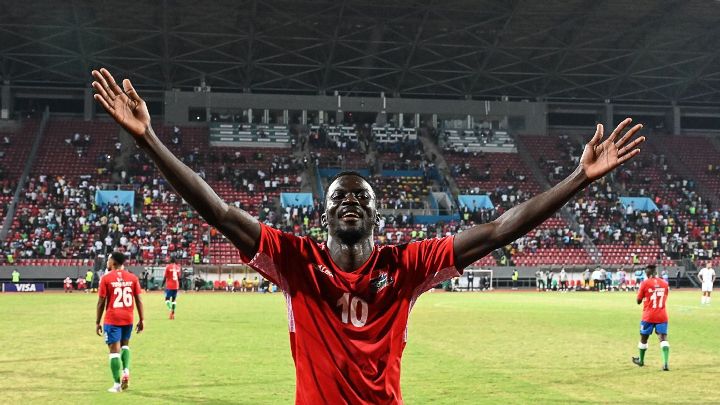 Everyone's been talking about Achraf Hakimi's mesmerising free kicks, and Vincent Aboubakar's eye-watering haul of six goals in four matches, but beyond the major headlines who are the players to have made a big impact at the Africa Cup of Nations? We pick nine under-the-radar players to have caught the eye during the tournament in Cameroon.

Much has been made of Gambia 's collective strength and the resilience they demonstrate before striking late in matches, but it's worth noting they also pose a considerable threat going forward as well.

Kamal was then influential against Ivory Coast as Max-Alain Gradel and then Wilfried Zaha were both neutralised effectively.

The Zamalek SC man has a trick or two of his own as well, having made his name as a winger, and his performances in Cameroon have been outstanding considering he made his international bow only at the Arab Cup in late 2021.

One of the beauties of a midseason Africa Cup of Nations is its capacity to offer refuge and renaissance for players who are struggling to make a mark in club football.

Pepe has been a major beneficiary this season, clearly enjoying himself in his four appearances for Ivory Coast, with his vitality and efficacy proving a sharp contrast to his underwhelming contribution to Arsenal's troubled season.

Pepe has had a hand in three goals at the Nations Cup, more than he's managed in nine Premier League appearances this term, and the Gunners will be hoping he can take some of his AFCON form back to the top flight.

There have also been flashes of the Lille Pepe, who was capable of moving inside, running the channels, and having a shot at goal, or going outside the full-back, stretching the defence and swinging in a cross.

"[Playing] in Africa is a very different football," Pepe told ESPN after his Man of the Match performance against Sierra Leone. "You have to adapt to the heat, the pitch, and you have to adapt quickly.

"I play with a great team, I understand their game and they understand mine. It's very enjoyable to play with them."

Let's hope he can say the same about Arsenal before the season is up.

Aboubakar has understandably stolen the headlines for hosts Cameroon, but Toko Ekambi has also offered genuine menace for the Indomitable Lions from wide areas, enjoying a fine understanding with left-back Nouhou Tolo and helping to get local fans firmly onside.

Relatively unknown outside the French lower leagues before this season, Allevinah played with Aviron Bayonnais in the amateur National 3 as recently as 2018 and made his top-flight league debut only last year after Clermont were promoted to Ligue 1.

Allevinah scored 12 goals during their Ligue 2 promotion campaign, and was the main beneficiary of Pierre-Emerick Aubameyang's desperate Nations Cup fortune when he went into the Gabon side as the ostensible replacement for the Gunners striker.

The Panthers fell against Burkina Faso, but Allevinah has at least offered hope for the Central Africans' future without Aubameyang.

"The players coming in [to replace Aubameyang] may not be as at high a technical level," Gabon coach Patrice Neveu told ESPN when asked about Allevinah's performance against Morocco. "But you need these other things in football to be strong in a match, like engagement, positioning, respect, and compensating for the errors of your teammates."

Sarr made his international debut only last season, aged 29, after initially rejecting the chance to represent Senegal in 2018, but he is certainly making up for lost time at the AFCON, where his controlled displays from right-back have given the Teranga Lions a dimension in wide areas that could serve them well at the business end of the tournament.

Having struggled to unseat Benjamin Pavard at Bayern Munich this term, Sarr also may see the Nations Cup as a valuable opportunity to put himself in the shop window.

Nigeria's revelation of the tournament, Simon had shown little of his Nantes form during the long tenure of previous head coach Gernot Rohr, often appearing to play within himself and take conservative options rather than push into the final third and attempt to provoke panic in the opposition defence.

But Simon was a force of nature under interim head coach Augustine Eguavoen, dazzling down the left flank and flummoxing full-backs during the Super Eagles' glowing group stage campaign.

His movement against Egypt was influential as Nigeria took the initiative and set the tone for their campaign, and he followed that performance with a goal and an assist as Sudan were put to the sword in game-week two.

Against Guinea-Bissau, despite only coming on for the final half an hour, he completed seven successful dribbles as tiring Lusophone legs had no answer for his speed and intelligent movement.

Tunisia's Mohamed Drager did an immense job of silencing Simon, however, as the Eagles limped out of the competition.

The Malawi forward was responsible for arguably the goal of the tournament against Morocco, when he lifted a 40-yard effort above Atlas Lions keeper Yassine Bono and into the top right corner of the North Africans' net.

Mhango, who's on the books of South African giants Orlando Pirates, also netted a double against Zimbabwe to secure a 2-1 victory that ultimately sent the Flames through to the Round of 16 at the expense of their COSAFA rivals.

His future in the South African Premier Soccer League has become the subject of some discussion during the tournament, with the striker's agent, Mike Makaab, telling media that he still believed the 29-year-old could still get a late career move to Europe.

With a year left on his contract with the Buccaneers, don't be surprised if a few clubs in more lucrative leagues are sniffing around.

Once dubbed the 'new Yaya Toure', and linked with the likes of Arsenal and Tottenham Hotspur, Sangare has dropped off the radar somewhat after leaving Toulouse for PSV Eindhoven rather than a club in one of Europe's major leagues.

However, his AFCON performances alongside Jean Seri and Franck Kessie in the Ivorian midfield served a reminder of his enduring qualities, and why those parallels with Yaya may not be too far-fetched.

His premature AFCON exit obviously casts a shadow over his fine campaign, but Sangare's cameo in Cameroon suggests he'll be back in one of Europe's big five leagues before too long.