Confusion surrounds Nigeria job but Eguavoen will back Peseiro 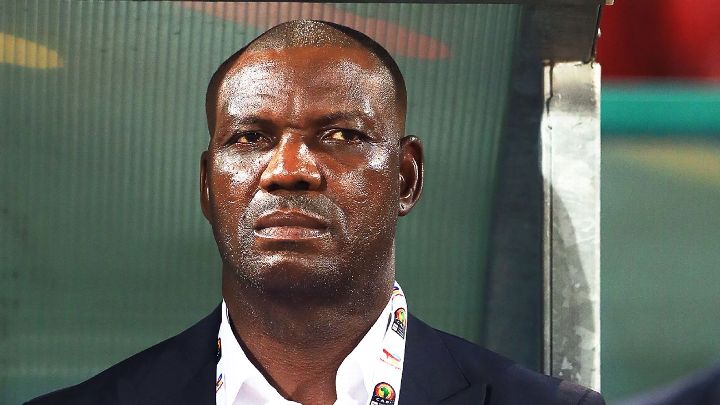 As Nigeria pick up the pieces of their shock Round-of-16 elimination from the Africa Cup of Nations, Augustine Eguavoen has told ESPN that he is willing to help incoming coach Jose Peseiro if the Nigeria Football Federation (NFF) finalises the appointment.

Peseiro was named Nigeria's incoming coach in December, after the sacking of Gernot Rohr, but Eguavoen was given the job in an interim capacity to lead the Super Eagles to the AFCON tournament in Cameroon. Eguavoen relinquished the role when the Super Eagles were eliminated by Tunisia.

"What happens next is that I'm the interim coach and the Technical Director of the Nigeria Football Federation," Eguavoen told reporters in the Mixed Zone after the 1-0 defeat by Tunisia.

"I will go back to my position now and allow the powers that be to make a decision on the way forward."

Sources at the NFF told ESPN that it was yet to finalise its decision on the full-time coaching position, even though the federation, prior to the Tunisia game, had been prepared to hand Eguavoen the job; senior NFF sources told ESPN that a contract had not been signed with former Venezuela coach Peseiro.

Sources close to Eguavoen have told ESPN that he would like to take the Super Eagles job on a full-time basis, but the former Nigeria captain says he is prepared to back Peseiro to the hilt if the NFF decide to appoint the Portuguese instead.

"He is coming to a foreign country," Eguavoen told ESPN.

"We've been on ground and we have to work closely. We will give him everything to make him succeed because it is country first.

"I will give him my report to study.

"I will tell him the background, the culture, how we operate here. Our philosophy and our style of football, and he will bring his own and we will look at it together and map out strategies for how we can make the country progress. Just to make sure we make him very comfortable and then he has nothing to worry about but just to grind out results."

If the NFF appoints Peseiro rather than Eguavoen, the new man will have barely a week to work with the Super Eagles before the first of the two World Cup qualifying playoffs games against Ghana.

It is a decision the NFF is grappling with after the disappointment of the performance against Tunisia.

"We can't be predictable for three consecutive matches straight up," a senior NFF official told ESPN in a not-so-veiled criticism of Eguavoen.

"We ought to have changed tactics and even personnel to surprise them, too.

"Everyone was too heartbroken to have straight thoughts. But now, we have to maintain our heads, be stable, and focus on making the best decision for Nigeria."

That decision, sources have told ESPN, could come as early as next week in order to commence preparations early ahead of the games against Ghana, who are experiencing their own share of coaching instability after the firing of Milovan Rajevac.

Eguavoen, who led Nigeria to third place at the 2006 Cup of Nations in Egypt, accepts the Round-of-16 exit was not good enough.

"We wanted to win the cup, but we had to take it game after game," he told ESPN.

"Getting to the Round of 16, I don't think it is good enough; not for Nigeria as a nation.

"But if you look at the opposition, Nigeria-Tunisia games have always been very very hot. So the game could have gone either way, and that is exactly what played out. It could have gone our way, but it went the Tunisians' way. That expulsion of [Alex] Iwobi changed the whole thing."

"We did not have time to do much before we left Nigeria," he said.

"Our first real serious training was when we arrived in Cameroon on [Jan. 6], and then we had to play our first game on the 11th.

"What I did was I told them off the field, I wanted them to have unity and hold nothing back. If you feel something is bothering you, feel free to say it because we are all pulling in the same direction. And on the field, feel very free to express themselves because they are all very talented players.

"I spoke to individual players, and, interestingly, the only time we had to do that was on our 58-minute flight from Abuja to Garoua. I asked them their best position and where they think they can perform well and also alternative positions. That was it."

Eguavoen's approach proved good enough as they sizzled through the group phase, but they came unstuck in their first game of the knockout rounds.

Eguavoen deployed tactics of stretching the play and creating chaos in the wide areas, but wide players Moses Simon, who had been outstanding in the group stage, and Samuel Chukwueze were shackled by the Tunisians, who dominated the central areas.

Alex Iwobi was sent on from the bench as a way to address that imbalance, but the Everton man was dismissed for serious rough play after only five minutes on the pitch.

The Super Eagles, nevertheless, created enough chances to have at least drawn the game, but they failed to convert their opportunities.

"We have to improve in our goal-scoring," Eguavoen told ESPN.

"Because even with 10 men, we created enough chances to score and even win the game. I am proud of the bonding, the ball movement, the ability to express themselves, and how they relaxed and enjoyed the game."

Nigeria will hope to build on those positive aspects in the Super Eagles squad, as well as improved finishing, when they face Ghana in the home-and-away World Cup playoff.