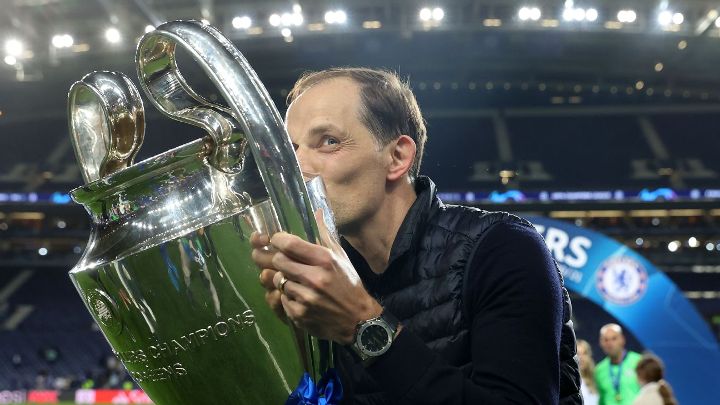 There was something different about Thomas Tuchel from day one. As the Chelsea head coach marks his first anniversary at the club on Wednesday, a source close to a first-team player outlines how he instantly understood his new surroundings.

"The basic message from [Tuchel] was: 'I don't know how long I'm going to be here, neither do you, so let's enjoy the ride,'" explained the source.

What a ride it has been. Tuchel delivered a Champions League trophy for only the second time in the club's history, broke their transfer record to sign Romelu Lukaku from Inter Milan and was named FIFA's Men's Coach of the Year at The Best awards earlier this month.

Tuchel is Chelsea's 11th permanent manager since owner Roman Abramovich bought the club in July 2003. This turnover is symptomatic of a ruthless culture in which success is paramount and player power has eroded the authority of coaches with reputations great and small.

So many enter this capricious environment thinking they will change it. Sources claim there was surprise among senior figures at the club when Frank Lampard, the club's former midfielder with a more acute understanding of a Chelsea manager's typical shelf life than almost anyone else, publicly fell into the trap of thinking he could break the mould.

"I felt like I took the job in a different position to most recent Chelsea managers," he said in December 2020. "I think people sympathise with that as well. Now, I feel like I would love to be part of the long-term plan here."

Tuchel knew the harsh reality of life with football's nouveau riche, having been axed by Paris Saint-Germain on Christmas Eve 2020, four months after guiding the Ligue 1 giants to their first Champions League final. He harboured concerns over succeeding a club legend like Lampard at Stamford Bridge, but sources have told ESPN that talks with another former playing great, the club's technical and performance adviser Petr Cech, were a significant factor in assuaging those fears.

Chelsea may yet chew up Tuchel and spit him out like so many before him, but the 48-year-old has so far proved himself the ideal fit.

"Chelsea is a club built to succeed now, not later. Failure isn't tolerated for long," said the source close to a first-team player. "That puts pressure on managers and some of them plead for time but Tuchel just views it as a huge opportunity. He told the players to seize the moment in what is a short playing career. They bought into that."

Tactically, it was a revolution. Tuchel went to a back three, admittedly a system Lampard had used on occasion, but with a difference: a 3-4-2-1 shape with two No. 10s operating behind a central striker, designed to give Chelsea more midfield control.

In Lampard's sole full season at the club (2019-20), the Blues conceded 79 goals across all competitions, an average of 1.44 per game, which ranks as their worst defensive performance since 1991. Tuchel's Chelsea conceded 24 goals in his first 50 games. No manager has ever performed better by the same milestone at an English club. This run included 31 clean sheets, the best record over the same period of any team in Europe's top five leagues.

Some at the club use Chelsea's contrasting fortunes in Europe as the perfect distillation of the upgrade from Lampard to Tuchel. Lampard oversaw a 7-1 aggregate defeat to Bayern Munich, the heaviest loss in Chelsea's Champions League history and the second-worst two-legged score line involving an English club. Tuchel won the whole thing.

There were mitigating factors for Lampard, not least the club's FIFA-imposed transfer ban and the subsequent emphasis on integrating young players, specifically Mason Mount and Reece James, both of whom Tuchel has undeniably benefitted from. But Tuchel's managerial experience at the highest level helped Chelsea surpass all expectations in his first season, achieving the moment Abramovich craves most on a balmy Portuguese evening in May.

The day before the two sides met in the Premier League earlier this month, Tuchel was asked whether he was anticipating another surprise.

"I don't expect anything special tomorrow because it is a league game and not a knockout game," he replied, implicitly referencing the Champions League final. "They are comfortably ahead [in the Premier League] so I think they will try to be the best version of themselves."

Tuchel's response conveyed a clear understanding of Guardiola in a head-to-head battle, but the City boss has gained a measure of revenge this season by streaking clear at the top of the Premier League when Chelsea were expected to mount a serious challenge following Lukaku's arrival.

Tuchel had a shortlist of candidates for the centre-forward position, which clearly needed rectifying last summer. Chelsea scored the fewest number of league goals (58) in last season's top seven and lagged well behind champions Manchester City's 83.

ESPN reported at the time that the Blues were serious suitors for Erling Haaland before it became clear Borussia Dortmund would not part with their all-conquering star, while they asked to be kept informed of Harry Kane's efforts to leave Tottenham Hotspur, despite the obvious difficulties of completing a deal with one of their fiercest rivals.

Integrating him appeared the easy part given Lukaku's improvement in Italy, his knowledge of the Premier League and Chelsea as a club. Yet it is in Tuchel's attempts to make Chelsea a more potent attacking force where the first signs of frustration have emanated from.

"It's not written over the manager's office, 'Defensive is what counts,'" the manager said on Nov. 24, when asked about that remarkable clean sheet record after 50 games.

In an effort to accommodate Lukaku and improve Chelsea's goal scoring, they have lost some of the defensive resilience that was the foundation of past success. In the 17 games since Tuchel's half century, Chelsea have kept only five clean sheets and conceded 18 goals.

Significantly, he has handled off-field issues with a mixture of patience and intelligence. Antonio Rudiger apologised for a bust-up with teammate Kepa Arrizabalaga during training in April, an incident that could have caused a rift had Tuchel not managed the situation with a delicate touch, allowing both players to air their views before consigning the matter to history.

More was asked of him when Lukaku gave an unsanctioned interview in December discussing his unhappiness at Chelsea and talking up a possible return to Inter. Tuchel walked a fine line expertly, displaying a firm hand when dropping Lukaku for Liverpool's visit a few days later before arranging a meeting at which the Belgium international could explain himself, pay a hefty fine, agree to apologise to the fans and move on.

Disagreements with key players have been the undoing of many managers, but Tuchel's pragmatism has served him well so far.

There is, however, one thing he cannot be insulated from: results.

No matter how genial Tuchel may appear, no personality trait will save him if Chelsea fall away in the final months of the campaign. There is recognition of City's relentless brilliance in recent weeks, but Chelsea did not expect to be 10 points behind the leaders at this stage of the campaign.

Tuchel is, however, the first manager to lead them to the finals of the Champions League, FA Cup and Carabao Cup. They play the latter's final against Liverpool next month and have a Champions League round of 16 tie against Lille on either side. Chelsea's season is finely poised.

Tuchel has a contract until 2024 but claims to be in the dark over the details.

"I don't even know [if I have an option beyond that]," he said last week. "I think I have a contract until 2024, and let's stay with this and let's try to stay as long as this contract says. Because history tells us that it's not that easy, but I feel very confident today that I can make it."

Time will tell, but it has been a fine start.

England and Manchester United's Harry Maguire has hit back at those who criticise him, saying negative stories about him are only done for "clicks."

The second leg of the Brazilian women's soccer final set a new South American record attendance for clubs of the region.

Berhalter: USMNT has 'work to do' before WC

USMNT boss Gregg Berhalter conceded that his side has "work to do" ahead of the World Cup following a 2-0 friendly defeat to Japan on Friday.

Messi: I endured 'bad time' in first season at PSG

Lionel Messi has said he endured a "bad time" during his debut season at Paris Saint-Germain but added he is enjoying his football again.