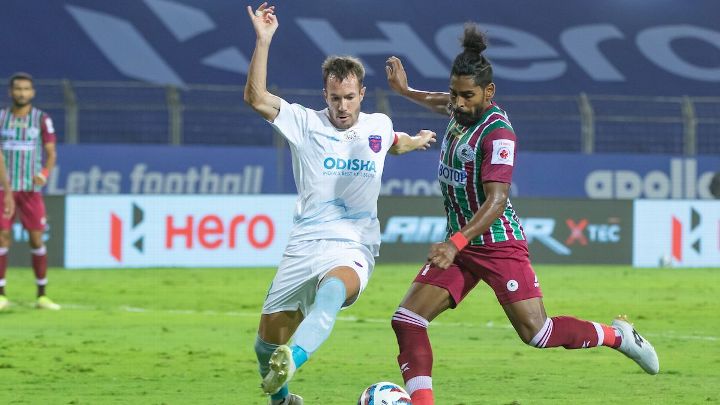 ATK Mohun Bagan and Odisha played out an end-to-end 0-0 draw at Fatorda, on Sunday.

On Sunday, Bagan didn't appear to show signs of rust, having not played for a while after an outbreak of COVID-19 in their camp, were on the front foot from the word go. Roy Krishna had a drive from close range, but the angle was acute and Arshdeep Singh saved without any fuss.

Liston Colaco let fly a long ranger soon after as Bagan bossed the game. Victor Mongil then had to put his body on the line to keep a David Williams piledriver at bay as the ball went out for a corner. Colaco then put his laces through the ball from distance but it went just over as Bagan kept coming at Odisha. Krishna was dealt with again by Mongil as he cut the Fijian's angle.

Colaco missed from close just before the half-hour mark and again forced Arshdeep into a brilliant save later.

Hector Rodas was then replaced at halftime, Nikhil Prabhu replacing him. Ashutosh Mehta gave away a cheap freekick right away after the change of ends, but Isaac Vanmalsawma's attempt was parried away by an alert Amrinder Singh.

Jerry Mawihmingthanga picked Odisha up, who looked the better side in the second half. His combination with Javi Hernandez kept Bagan on their toes but they were profligate. Prabir Das was brought in for Roy Krishna at the hour mark.

Javi Hernandez carved out a couple of chances against his former side on either side of the cooling break. First, he hit the side netting which followed a sketchy clearance from a corner. Then, he did find the back of the net, but it was ruled offside.

Odisha tested Bagan's resolve toward the end of the game with a barrage of attempts but Amrinder Singh stood his ground, maintaining a clean sheet before the all-important derby next weekend.