Chasing Premier League promotion, Blackburn Rovers are a success story after a decade of humiliation 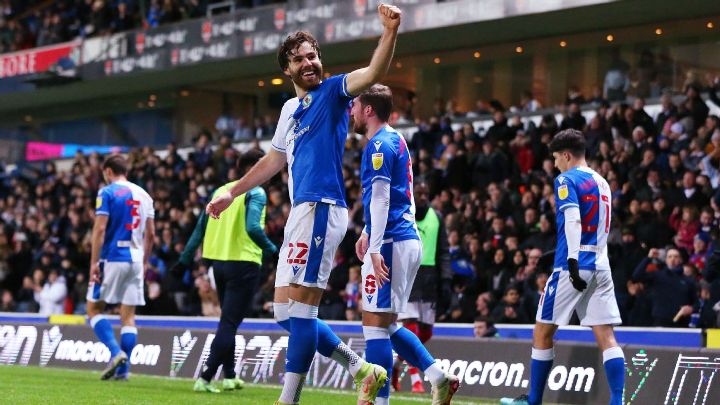 This week, Blackburn Rovers suffered their first league defeat in almost three months. Wednesday's 2-0 loss at Hull City denied them the chance to climb into the automatic promotion positions at the top of the EFL Championship and move a step closer to a return to the Premier League. It was a setback, but only of the kind that every other normal football club has to suffer from time to time.

For too long, Blackburn were anything but a normal football club; defeat at Hull on a cold night in January without the prospect of the manager being fired, or the supporters staging a protest against the owners, is a genuine sign of progress. Blackburn famously won the Premier League title in 1995 after being bankrolled to success by Jack Walker, the boyhood fan who became a multi-millionaire and then outspent Manchester United, delivering glory to a small-town club that had fallen on hard times.

But Wednesday's defeat at Hull was an example of how the chaos at Blackburn has been replaced by calm. Rovers are still owned by Venky's, but away from the glare of the Premier League spotlight, they have taken a step back from the furore and allowed the club to be run by experienced football people. Stability has returned, their midweek loss nothing more than a bump in the road.

Blackburn face Middlesbrough at Ewood Park on Monday (2:40 p.m. ET, stream live on ESPN+) with another opportunity to move into the top two and the chance to boost hopes of promotion, 10 years after being relegated from the Premier League, but it has been anything but a smooth ride on the long journey back.

Ronaldinho, David Beckham and Raul. Venky's tried to sign all three global stars during the early years of their time in charge, but failed each time. They also attempted to hire Diego Maradona as manager, another plan that never got off the ground.

When they bought Blackburn for £23 million in Nov. 2010, Venky's chairperson Anuradha Desai spoke of "leveraging [Venky's] global influence in establishing Blackburn Rovers as a truly global brand," and of "actively supporting the organisation to ensure that Blackburn Rovers remain one of the best-run clubs within the Premier League." Within a month, though, they had sacked Sam Allardyce as manager, replacing him with the inexperienced Steve Kean, and the tailspin began.


Venky's recruited global events management company Kentaro as consultants for their recruitment spree and pursued the likes of Ronaldinho, Beckham and Raul, only to sign unknowns such as Mauro Formica, Ruben Rochina and Myles Anderson.

"It was a horrible time," a Blackburn source told ESPN. "One agent started to sleep at the training ground because of the amount of business that was going on in terms of players coming and going. I don't think the owners knew the extent of it. They were good people, but they knew nothing about football and it left them open to being taken advantage of."

Reports emerged of Venky's being exploited by third parties, while the Premier League was also criticised for allowing the family to buy one of England's most historic clubs, especially when it emerged that Venky's were unaware that teams could be relegated from the division.

"Venky's passed all of the Premier League owner and director tests," a source involved with the oversight of the takeover told ESPN. "Richard Scudamore, the then-Premier League chief executive, met the family and their business plan did not raise concerns.

"But as the years have passed, I think it's fair to say that they were exploited by some within the game because of their naivety and there were some fairly pejorative criticisms made of them centred on their ethnicity and background as so-called chicken farmers. They were given a rough ride."

Blackburn's revival can be attributed to two men: Mowbray and club chief executive Steve Waggott, who have worked in tandem since 2017 to put the club back on an even footing. Venky's remain in charge, but Waggott is left to run the club and report back to the owners when required.

"When I spoke to the owners, I told them that it would be a bumpy ride for a while and that I would be throwing the gears around until we got everything into neutral again," Waggott told ESPN. "But the end goal was to deliver stability and sustainability. Anyone can fly a plane with the right training, but when it hits turbulence, you need somebody with experience, who knows what they are doing, to land it, and that's what Tony and I have brought to the club."

Waggott and Mowbray worked to move on the club's older players and turn to youth, both for experience and the chance for an even younger player at Ewood Park to start climbing the ladder. Blackburn also use the loan system to their advantage, with five of Mowbray's promotion-chasing squad having arrived on temporary deals from Premier League clubs or top-flight teams around Europe this season.

Mowbray's team play fast, exciting football and have reenergised the Blackburn fan base, with more than 2,000 making the three-hour journey to Hull on Wednesday.

"We feel like we've got our club back," Rovers fan Shane told ESPN at Hull. "The players are all fighting for each other and there are no prima donnas out there. It's brilliant to see."

As for Mowbray, the secret of reviving Blackburn is all about stability, patience and trust.

"It's too simplistic to say you have to give every manager four or five years," Mowbray said. "If things aren't going the right way and the personalities aren't connecting, I think the owners have to be able to stand back and assess.

"In football, the emotions get wrapped up in it and if a percentage of fans on social media say, 'get the manager out,' the owners change the manager and six months down the line, the next guy may be worse and they change again. Next thing you know, you've had six managers in three years, the team are going nowhere and people question you for your leadership.

"But I know the work ethic required. I like being in football and if I find some bad human beings or people with agendas who are not part of the team, I move them on as quickly as possible, because you can only be successful with a team that is connected. At this moment, with young players who are trying to find their way, you can go places."

So can Blackburn bridge a 10-year gap by winning promotion this season and take Venky's back to the division they thought they couldn't drop out of?

"I do believe it would be miraculous to finish in the top two considering the quality and depth of clubs like Fulham and West Brom," Mowbray said. "But at the moment, we are doing quite well."

In many ways, Blackburn are already a success story again. All that matters now is what happens on the pitch rather than the mistakes that have been made off it.