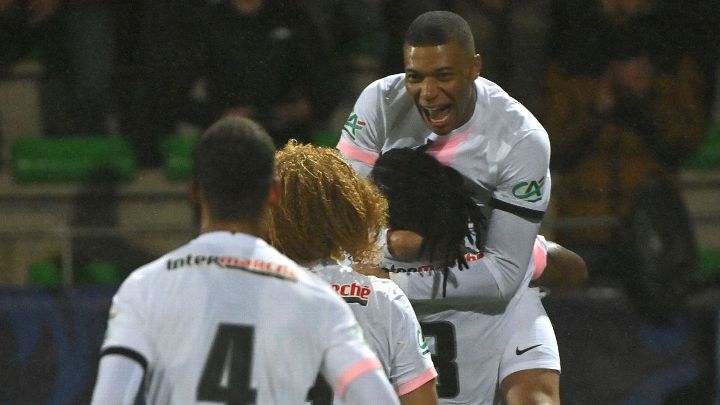 Leading the line for the Ligue 1 giants, Mbappe took just 17 second-half minutes to register a hat trick in a 4-0 win that ensured PSG's qualification for the round of 16 of the competition for the 20th time in the past 21 seasons.

Presnel Kimpembe headed the Parisians in front midway through the first half before Mbappe put the result beyond doubt with a quick-fire treble between the 59th minute and 76th.

The final goal scored at the Stade de la Rabine by Mbappe, who turned 23 last month, was his 150th for PSG in just 196 games. That milestone comes just a few weeks after his brace against former club Monaco last month included his 100th Ligue 1 goal scored for PSG since he opened his account on his debut in a 5-1 win at Metz on Sept. 8, 2017.

Here's his PSG tally broken down by competition:

Here are how his totals for Monaco and France broke down:

Despite his tender years, Mbappe is Paris Saint-Germain's third-highest goal scorer of all time and is now just six goals behind Zlatan Ibrahimovic, the player in second place on the list.

Ibrahimovic scored 156 goals in 180 games during his stint in Paris, which means Mbappe will almost certainly overtake the Swede's grand total before the end of the season.

"These 150 goals are a source of pride," Mbappe said after the game, having claimed the match ball. "Scoring so much at such a big club is always a pleasure. The gap is narrowing more and more [for the top scorers].

"I'm lucky to be alongside great players, I know Ibrahimovic is not far away. But the most important thing is to qualify and continue to prepare well for the next challenges."

Of course, PSG will be very concerned about what those "next challenges" are. Mbappe's contract is up at the end of the season, meaning he is free to hold talks with foreign clubs now and agree a free transfer in the summer.

Sources have told ESPN's Mark Ogden that Real Madrid are trying to sign Mbappe (as well as Erling Haaland) next summer in an attempt to take advantage of the financial problems at Barcelona by landing the two most sought-after players in world football.

Real failed with a €200m move for Mbappe during the summer transfer window, but the France international is expected to move to the Bernabeu as a free agent in July.

So PSG should be celebrating every scoring landmark Mbappe reaches over the rest of the season, because each one could be his last for the club.