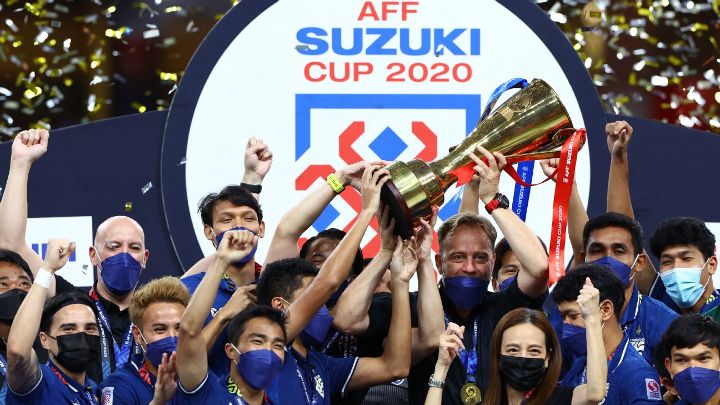 Thailand have won a record-extending 6th AFF Suzuki Cup after holding off a spirited Indonesia challenge at Singapore's National Stadium on Saturday, with the 2-2 draw in the second leg of the final enough to see them emerge triumphant 6-2 on aggregate.

With an emphatic 4-0 lead from Wednesday's opening encounter, the Thais were firmly in control of proceedings but Indonesia did their best to keep things interesting as they opened the scoring after just seven minutes, with Ricky Kambuaya's speculative effort spilled by opposition goalkeeper Siwarak Tedsungnoen and trickling in off the post.

- Polking wants AFF triumph to be just the start of Thai resurgence
- Don't miss The John Dykes Show, with all new episodes each Friday on Disney+ Hotstar. Click here to join the conversation!

But within 11 minutes of the second half, the War Elephants turned the tie around with two goals in three minutes through Adisak Kraisorn and Sarach Yooyen, before Indonesia salvaged some pride with Egy Maulana's 80th-minute equaliser ensuring they would become only the second team to hold the Thais to a draw at the tournament after Vietnam.

"I really have to say thanks to Khun Pang (Thailand team manager Nualphan Lamsam), who was the one who believed in me and gave me the job, and then the players who were just amazing.

When asked about the incident, Indonesia coach Shin Tae-yong defended his players by saying: "Yes, I was very disappointed that those four players were made unavailable.

"Before I get into that, I would like to thank to Singapore government, the Football Association of Singapore and the AFF for allowing us to have this tournament in the midst of the pandemic. However, one thing that has to be highlighted is that there have been administrative and organisational issues that have caught my attention.

"Before we arrived for the tournament, we were told we had two floors of the hotel entirely to us but that was not the case. There have been other guests that have made a lot of noise, and especially on weekends when there are drunken guests from wedding ceremonies, result in our players not being able to sleep well.

"Moving forward, these problems should be addressed to ensure the wellbeing of the players in order for good matches at the tournament."