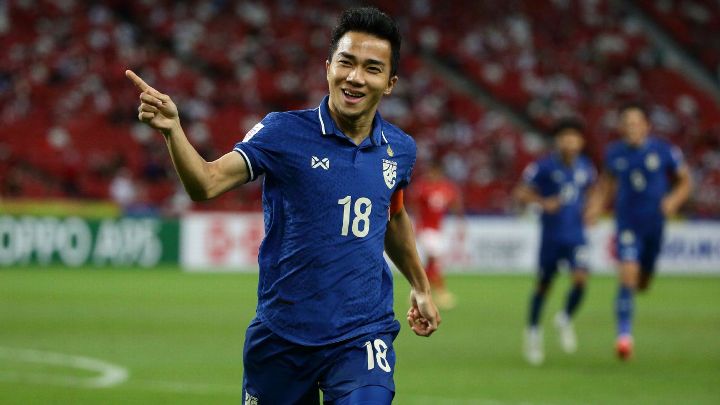 The talismanic playmaker took less than 90 seconds to open the scoring with a ferocious drive from just inside the area and then added a second in the 52nd minute as he applied the finishing touches to a sweeping counterattack, before further strikes by Supachok Sarachat and Bordin Phala capped off a dominant performance for the War Elephants.

- Thais' tribute to mourning Kawin the moment of AFF Suzuki Cup
- Don't miss The John Dykes Show, with all new episodes each Friday on Disney+ Hotstar. Click here to join the conversation!

While there is still a second leg still to play on Saturday, it seems almost certain that the Thais will go on to reclaim their status as kings of Southeast Asia but coach Alexandre Polking was keen to stress the need to remain calm and focused.

"I think it was really a great performance and I would like to give big credit to the players. We can have all the ideas, plans or strategies but in the end they are the ones to execute it," said the German-Brazilian.

"It's much easier to be a coach when the players are this good.

"I don't think this is done. We've seen the best teams in the world in the Champions League losing a game after a 4-0 lead. We will give our full concentration and focus, as we cannot give Indonesia any chance to come back in the second leg."