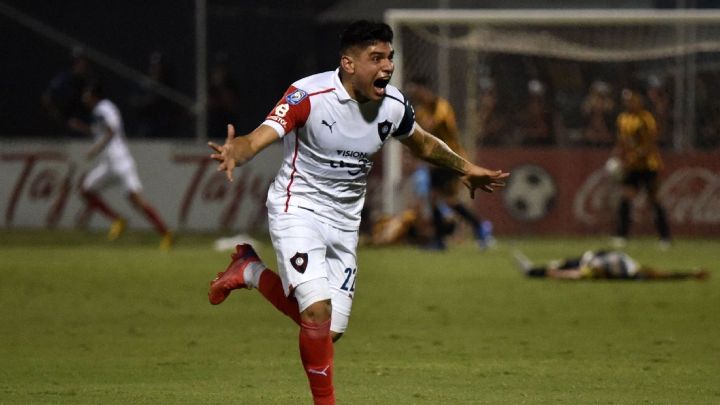 The last round of the competition played host to the clash of the two teams in contention for the title. Traditional giants Cerro Porteno needed just a draw. Upstarts Guarani had to win, and they had home advantage. And early in the game they had numerical advantage as well. After consultation with VAR, Cerro full-back Alan Benitez was sent off. Cerro Porteno were a man down, and soon after half-time they were two goals down. When the second goal went in, the TV commentator shouted "Guarani champions!" How could Cerro Porteno possibly turn things round?

A comeback seemed even more unlikely, all but impossible, when the game moved in to stoppage time. Two goals up, a man up, all that Guarani had to do was keep their heads and run down the clock.

But then the fun and games started. Cerro Porteno strived to apply late pressure. They won a corner. Being so close to a famous victory proved too much for some in the Guarani ranks. Full-back Rodri Ferreira fell down injured, behind the goal line.

From there, things got worse for the hosts.

In the general fracas, the pushing and shoving of the stoppage-time tensions, the referee awarded a yellow card to Guarani defender Roberto Fernandez. It was his second, and off he went. Guarani now had one centre-back in goal and the other off the field. Now playing 10 against nine, Cerro Porteno poured forward. Caceres in goal inspired no confidence and the patched up defence was a collective bag of nerves. In the course of a crazy two minutes, Alberto Espinola forced home one goal, Guarani launched a dangerous attack, Cerro won the ball back, moved it forward and Espinola crossed for Jair Patino to head home at the far post. Patino, already on a yellow, overdid the celebrations and saw red, and it was nine against nine for the last few seconds before the referee blew the whistle and Cerro Porteno had won the title.

The Guarani players surrounded the referee, who appeared to take a blow on the head from the assistant coach, but he was blameless. Guarani had let it slip because they had been unable to cope with the proximity of victory. They wanted to win too much.

This certainly would not seem to apply to the stoppage-time shenanigans in the Colombian second division which appeared to end with the promotion to the top flight of Union Magdalena.

The game between Llaneros and Union Magdalena appeared to be of little relevance. If Fortaleza won their match against Bogota then Union could not be promoted. At the end of 90 minutes, Llaneros were leading 1-0. But then the news came in that Fortaleza had lost.

Two stoppage time goals from Union Magdalena would now change everything. And they came, against a defence that melted away in suspicious fashion. The Llaneros goalkeeper appeared to be doing his best, but the level of commitment of the defence in front of him was highly questionable.