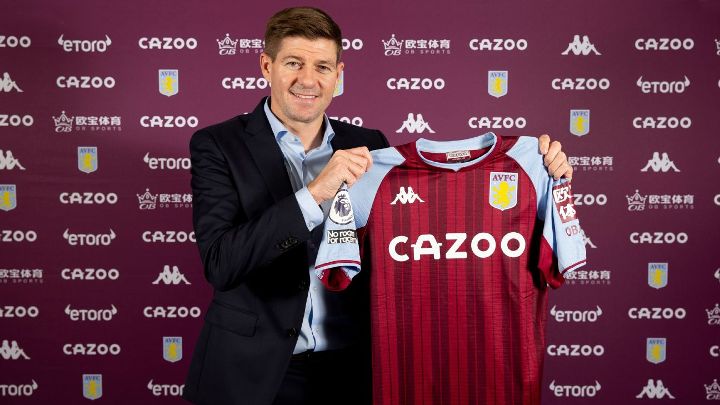 Aston Villa have appointed Steven Gerrard as the club's new manager, the Premier League side announced on Thursday.

The former Liverpool and England midfielder takes over from Dean Smith, who was sacked on Nov. 7 following a run of five consecutive defeats in the league.

"Aston Villa is a club with a rich history and tradition in English football and I am immensely proud to become its new head coach," Gerrard said of his appointment. "In my conversations with Nassef, Wes and the rest of the board, it was apparent how ambitious their plans are for the club and I am looking forward to helping them achieve their aims.

"I would like to express my sincere gratitude to everybody associated with Glasgow Rangers for giving me the opportunity to manage such an iconic football club. Helping them secure a record-breaking 55th league title will always hold a special place in my heart. I would like to wish the players, staff and supporters the very best for the future."

Gerrard has put pen to paper on a 3½-year deal at Villa Park.

Villa CEO Christian Purslow added: "The board of Aston Villa are delighted to appoint Steven as our new head coach. Since moving into coaching after his illustrious playing career, Steven began by managing and developing top young players in the Liverpool FC Academy which is experience we value highly at Aston Villa.

"He then took the brave decision to test himself in the intense and high pressured environment of the Scottish Old Firm. His subsequent achievement in winning the Premiership title with Glasgow Rangers really caught our eye as did his experience in Europe.

"It has been very clear in our discussions with him that Steven's coaching ambitions, philosophy and values entirely match those of Aston Villa. We are excited he has agreed to lead us in the next phase of our ambitious plans as we look to build on the progress made since Nassef Sawiris and Wes Edens took over the club in 2018."

Gerrard departs the Scottish champions after guiding the club to their first league title in 10 years last season, as well as the club's first ever unbeaten league campaign.

He leaves Ibrox after a 3½-year spell in charge, in what was his first senior managerial position since he retired from playing in 2016.

Gerrard, 41, who made over 500 Premier League appearances across 17 seasons for Liverpool, will take charge of his first Villa match at home to Brighton on Nov. 20. He will then make a return to Anfield to face Liverpool on Dec. 11 for the first time during his managerial career.

Gerrard takes over a Villa side who sit 16th the Premier League table, two points above the relegation zone, and are without a win since September.

Smith, a Villa supporter who was popular among the home fans after steering the club to promotion from the Championship in 2019, was dismissed after an underwhelming start to the season in which the club struggled to adjust to the loss of Jack Grealish to Manchester City.

Although Villa received a British transfer record fee of £100 million for the England international, the club have yet to see returns on their significant investment in the summer. Villa signed Danny Ings, Leon Bailey and Emiliano Buendia and ranked fifth in spending amongst Premier League clubs during the transfer window.

Gerrard leaves Rangers 13 games into the defence of their Scottish Premiership title and midway through the club's bid to reach the knockout stages of the Europa League for a second consecutive season.

His time in Glasgow will be remembered for ending Celtic's nine-year dominance in the Scottish top flight during the 2020-21 campaign, and ensuring that their rivals did not eclipse Rangers' own record of nine successive league titles.

While Gerrard also achieved success in making Rangers competitive in Europe, his teams struggled in the domestic cups and Rangers failed to add to their Premiership title last season following defeats to St Mirren and St Johnstone.

As one of the greatest players in Liverpool's history, Gerrard also has been tipped as a potential successor to Jurgen Klopp at Anfield.

His only other coaching experience came when he managed Liverpool's under-18 side prior to taking the Rangers job in 2018.

Gerrard, who also played for Major League Soccer side LA Galaxy at the end of his career, was linked with the Everton job this summer before Rafael Benitez was appointed.