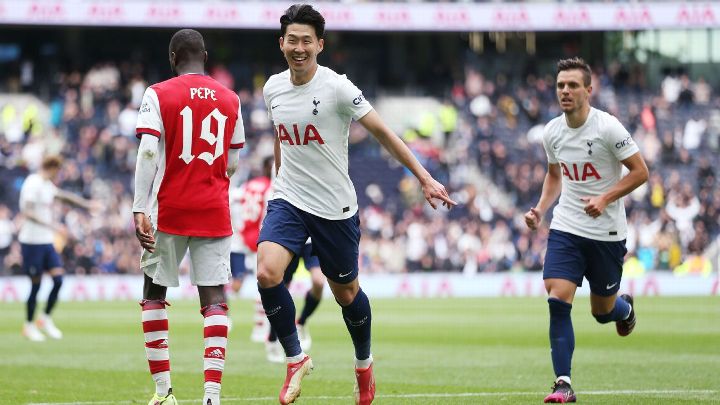 Son's left-foot drive after good work from substitute Japhet Tanganga ensured Spurs completed their preseason preparations with a hard-fought victory in front of around 25,000 fans at the Tottenham Hotspur Stadium.

Harry Kane was absent as he continues to isolate at the club's training ground hotel after returning for preseason on Saturday but Spurs otherwise named a strong line-up with Hugo Lloris returning in goal and Son leading their attack.

Despite his absence, Spurs boss Nuno Espirito Santo said: "Harry is with us... I will speak with Harry probably as soon as possible because he is already at [Spurs' training ground where he is isolating]. Not today, today was the day of the match but we have a training session [on Monday] and with social distancing I will hopefully speak with Harry."

Spurs' new signing Cristian Romero also didn't feature because of a knee injury and Nuno added: "He didn't train yet with the group, it is true. He finished the last game with a problem. It is much better now but we have to be very careful first, not take any chances. Like all the players, [Giovani Dos Santos], didn't have many sessions, Hugo [Lloris], we have to manage a lot of aspects until we decide to put the player on the pitch. But he is here, he looks good. When he starts training in a normal way, he will become an option."

Arsenal boss Mikel Arteta partnered Albert Sambi Lokonga, an £18 million summer signing from Anderlecht, with Granit Xhaka in midfield and that pairing gradually gave the visitors a degree of control in the first half after a lively start from Spurs.

Son volleyed wide from the edge of the box in the sixth minute and should have scored 10 minutes later when side-footing straight at Bernd Leno from five yards out after good work from Lucas Moura.

However, Alexandre Lacazette began to influence proceedings and tested Lloris with a 25-yard shot which the Spurs goalkeeper turned behind before hitting the post with another effort from a similar distance.

Dele Alli was then booked for a late tackle on Nicolas Pepe, a sign of the competitive undercurrent which ran throughout a first half which ended with Arsenal on top yet Tottenham creating the best chance.

A good passage of play from the hosts saw Son tee up Alli as he arrived in the box but he could only hit the post from close range with the goal at his mercy.

Pierre-Emile Hojbjerg and Arteta exchanged words early into the second period after the former came close to colliding with the latter as he attempted to keep the ball in play. Arteta poked his finger into Hojbjerg's chest as the Spurs midfielder argued he was out of his technical area, prompting an intervention from referee David Coote.

Arsenal duo Kieran Tierney and Xhaka were booked for late challenges before Spurs hit the woodwork again just before the hour mark.

Davinson Sanchez flicked on Son's free kick from the right to the far post where Alli tried to turn it goalwards but he hit the upright again.

A brief cessation in hostilities saw Spurs fans warmly applaud Arsenal winger Bukayo Saka onto the pitch as he was introduced in the 63rd-minute for his first outing since missing a penalty in England's Euro 2020 final defeat to Italy last month.

Spurs continued to look the more likely to score and eventually broke the deadlock when Tanganga persevered to force his way into the box before finding Son, who beat Leno with a powerful finish.

Eric Dier clipped the crossbar with a late free kick but Spurs saw the game out to condemn Arsenal to their second consecutive preseason defeat.

Asked postmatch about the absence of Rob Holding and Joe Willock, Arteta said: [They were missing for] two different reasons. Rob wasn't available, he wasn't fit enough to play today and with Joe, we will explain the reasons when we can. That's all I can say now. When I can say more, I will let you know."