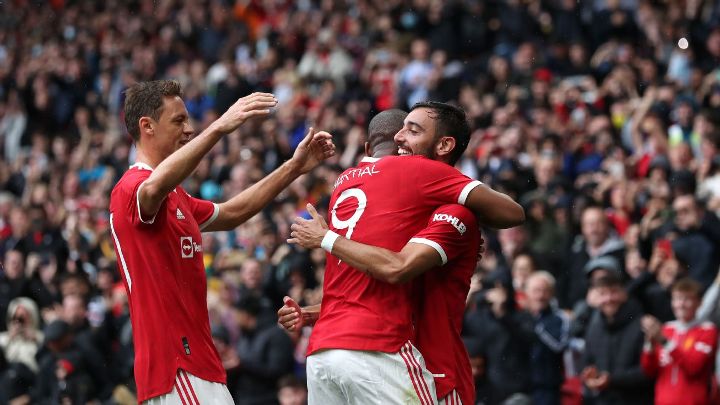 Manchester United ended their summer schedule with a comfortable 4-0 win over Everton at Old Trafford on Saturday.

David de Gea had a couple of nervous moments in United's goal but it is a result that will only increase the doubts over Everton's decision to appoint former Liverpool manager Rafael Benitez as boss over the summer.

United were gifted their opener by Jordan Pickford after just eight minutes when the England goalkeeper dropped Lucas Digne's header back at the feet of Greenwood, who just had to tap the ball into an empty net.

It almost got worse for Pickford two minutes later when he fumbled Fernandes' tame shot from the edge of the penalty area but Martial couldn't take advantage.

There was nothing Pickford could do about United's second goal, Maguire heading in Shaw's corner after 15 minutes.

It was 3-0 before half an hour was on the clock when Fernandes curled in a wonderful free kick from 20 yards.

It was enough for some of the 1,500 travelling fans to make an early exit.

Despite Solskjaer bringing on Paul Pogba at half-time, Everton fared slightly better in the second 45 minutes and almost pulled a goal back when Andros Townsend hit the underside of the crossbar from 10 yards.

Substitute Dalot, who has returned from a season on loan at Milan, got the fourth in stoppage time with a clever header from Fred's cross which looped over Asmir Begovic.

"It was about getting the minutes in," Solskjaer said. "The work they have put so far has been good and they were rewarded. We've had a longer preseason than last year.

"This summer everyone has had at least three weeks off. Some have had four or five. We're still lacking 90 mins for a few but we're better prepared than last season."