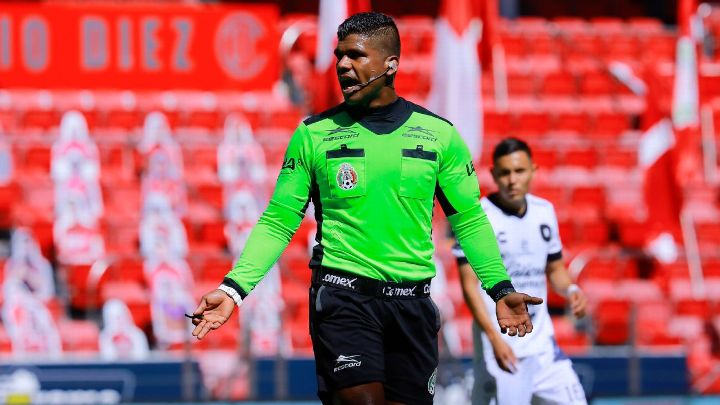 A Liga MX referee faces a hearing on Thursday to protest his recent firing, which he says is racially motivated.

Adalid Maganda was officially let go by the Mexican Football Federation (FMF) on Tuesday. A statement announcing the decision slammed the referee for poor performance, moonlighting in non-sanctioned matches during the pandemic, and a lack of familiarity with VAR, among other issues.

Maganda last worked on Jan. 10, calling a Liga MX match between Toluca and Queretaro in which he drew ire from players and fans alike for missing key calls.

However, Maganda fired back, accusing Arturo Brizio, Mexico's head of the refereeing committee, of a personal vendetta in which skin color played a part in the decision.

"[Brizio] is doing harm to referees in Mexico," Maganda said on Tuesday, in an interview with Futbol Picante on ESPN Deportes. "This man, with all due respect, is not right for this job. He's right for a job on TV [giving referee analysis], but not to lead the committee."

Maganda stated he was not given proper training on VAR, claiming that while the FMF offered courses for referees as the technology was rolled out, Brizio never included him on the list of those who should receive the lessons.

Though Brizio's video review of Maganda's last match appeared to defend and uphold many of the referee's decisions, he was not selected to work in any Liga MX matches since then. He was ultimately fired on Monday.

The 36-year-old referee is perhaps best known in Mexico for staging a hunger strike to save his job from a previous firing in 2018. Maganda, who identifies as Afro-Mexican, alleged Brizio had referred to him by his skin color in a meeting with other members of the committee at the time. Following a brief protest outside the FMF offices in Toluca, Maganda was reinstated.

"Mr. Brizio is very elitist," Maganda told El Pais in 2018. "He doesn't like short people, or people of color."

Though Maganda was brought back into the fold after his hunger strike, he said he was given little opportunity to prove himself, at one point finding himself not selected to work by the committee between March 13 and Aug. 31 of 2020. He said the inactivity drove him to referee an amateur match after the start of the COVID-19 pandemic.

"What does a referee need? To work so you don't forget the pitch, and that was the last option I had," Maganda said.

Though he did not contract the disease from the experience, he was further sanctioned by the FMF, sitting out several more weeks of matches before receiving assignments as a fourth official for various Liga MX games. His assignment as referee of the match between Toluca and Queretaro marked the end of a drought spanning back to March 8, when he was appointed to call Tampico Madero vs. Venados in Mexico's second division, the Liga de Expansion.

If he is not reinstated on this occasion, Maganda said he felt Mexico could put hosting rights for the 2026 World Cup at risk.

Following the events in 2018, Maganda claimed contact from FIFA, with instructions to get in contact with them if any other incidents arose from alleged discrimination. He told ESPN on Tuesday he plans to do that if the situation is not resolved in his favor.

"If they take away hosting for Mexico, it'll be [Brizio's] fault," Maganda said. "FIFA will do that, for acts of racism."