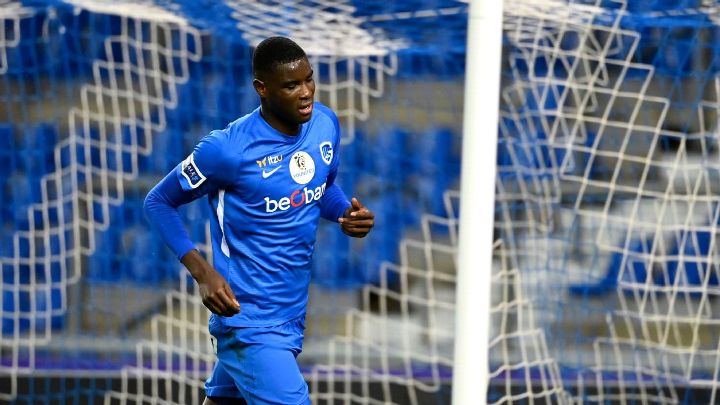 Leading this charge is Belgium Jupiler League top scorer Paul Onuachu who, for some strange reason, can't seem to find the same deadly efficiency in green and white.

There is also a first time entry for Terem Moffi, who is taking the French Ligue 1 by storm, and a place for Ademola Lookman, who has become Fulham's attacking fulcrum.

A hat-trick in his very first game in January propelled Genk to a 4-1 away win at AS Eupen and looked to be a sign that January 2021 would shape up to be a good month for the Nigeria striker, and a bad one for opposition defenders.

And so it proved to be, as the Nigerian finished with seven goals in seven games this January, including a brace in the penultimate game before the month drew to a close, in a 3-2 win over Waregem.

Those goals not only earned him man of the match awards, but took his tally for the season to 22. That is six more than his closest challenger for the top scorer.

He is now just 8 goals away from the 30 goal mark, the first time in 20 years a player has scored that number of goals in the Jupiler League. The last player to do so was Wesley Sonck in 2001/2002.

To be clear, it is not just about the goals for Onuachu. Genk's play almost seems to revolve around him, so that even when he does not score, he is a constant threat.

There is no question about it, when Super Eagles boss Gernot Rohr names his squad for the internationals in March, Onuachu's name has got to be top of that list.

It is a testament to how many goals flowed in January that even Wilfred Ndidi, who rarely finds a ball beside his name in these match stats, actually got on the scoresheet. And with a scorcher, no less.

Is it coincidence that Leicester won all five of their games in January with Ndidi playing a part, and then the one game where he goes off with injury, they draw? Worse, they lose the very next game with him unavailable?

Terem who? Well, if you did not know his name, five goals in five consecutive games in Ligue 1 would have given you the heads up.

PSG most certainly do know his name, sadly for them.

With less than 30 minutes of play left, the Nigerian came on as a substitute to lead a fightback from Lorient and help them claim a 3-2 win over the French champions. This, after they had surrendered an opening lead to go 1-2 down.

First off, he played a tight one-two to claim an assist for Yoane Wissa, which got Lorient back on 2-2 terms with the Paris millionaires.

Then, with time running out and PSG camped in the Lorient area in search of a winner, Moffi raced away on a devastating counterattack, shrugged off France defender Presnel Kimpembe to calmly slot under Sergio Rico for the winner.

The goal made him the first player in Lorient history to score in five consecutive games. Four of those came in January, and rightfully earns him a debut place on the Rankings.

Sunshine Stars are currently fourth on the Nigeria Premier League table, but they would not be so high without the five deciding goals of Sadeeq Yusuf Ahmat, who currently tops the NPFL scorers chart.

The Akure side started the season somewhat badly, with one win and two losses from three games. In their third game, things were looking really desperate at home to Lobi Stars.

Fuad Ekelojuoti has given the home side the lead, but the Makurdi boys stormed back to score on the stroke of halftime, and again with just under a quarter of an hour to play.

They held on to that lead until deep into injury time when Yusuf popped up to sneak in the leveller, to the deep relief of the home fans.

He was at it again the very next game, coming on as a sub to help get the lone goal that sealed a badly needed win against Warri Wolves.

But he saved his best performance for Akwa United, scoring both goals as Sunshine came away with a 2-1 road win, before adding one final strike in January to take down Enugu Rangers 3-1.

Officially Joe Aribo only has one goal in January, but we're making it one and half for forcing the own goal in the win against Celtic, for which he was rightfully named Man of the Match. Just to be clear, it was his deflected header which went in for the 1-0 score.

He added another assist against Hibernian and weighed in with a goal in the 5-0 whitewash of Ross County.

Rangers are cantering to the Scottish title and Aribo is proving to be the midfield spark for Steven Gerard's men.

The only reason Sadiq Umar is not higher up this list is because he plays in the Spanish second division.

It did not look such a great idea when he decided to trade down a division from Partizan Belgrade in the Serbian top flight to Almeria in the Segunda but, erratic as ever, Jololo is making it work for him.

Those goals have taken Almeria to third on the log, three points behind leaders Mallorca and level with Espanyol, with a game in hand over the top two.

No surprise that he has been nominated for the Player of the Month award.

It seems such a lifetime ago that Ademola Lookman missed THAT late penalty kick and broke down on the turf.

Since then, he has been a player reborn. In some ways, that miss appears to have inspired his game, and he has become the fulcrum of Fulham's attacking play.

The club may be wallowing in the Premier League's relegation reaches but Lookman is the brightest spark in that sea of gloom.

His assist for Fulham's goal in the 1-1 draw at Spurs was special, using quick feet and tidy touches to get away from Sanchez and stand up an exquisite ball into the box.

But what better way to put the cherry on top of a string of excellent performances than with a goal against Manchester United. Shame it had to end with a loss.

Multiple Man of the Match awards, five goals in six games... it is tough to argue against putting this youngster in these rankings, despite the fact that, like Sadiq, Marcus Abraham also plays in a second division.

The 21-year-old scored three of his five goals in consecutive games in January and in just four games.

Beyond the goals, Abraham looks a real talent, with an educated left foot, the pace of a cheetah and the awareness of a veteran. It is only a matter of time before he will be taking those talents to the big league.

He may be a bit long in the tooth but Tony Nwakaeme is still doing the business. He only scored twice in seven games in January, but the 31-year-old is as important to Trabzon as any player.

He opened the scoring in the win over Fatih Karagumruk at the beginning of the month. Three matches later, he was on hand for a goal and an assist in a 3-1 win over Konyaspor.

But his crowning performance of the month was helping Trabzon claim the Turkish Super Cup over champions Istanbul Basaksehir.

Crotone and their Nigerian arrowhead are enduring some torrid times in Serie A. Bottom of the log and looking firmly rooted, they are barely picking up points.

But despite being odds on favorites for relegation, Simy Nwankwo is still finding the back of the net with some regularity.

The forward scored three times in January with two assists to keep whatever slim hopes the club may have alive.