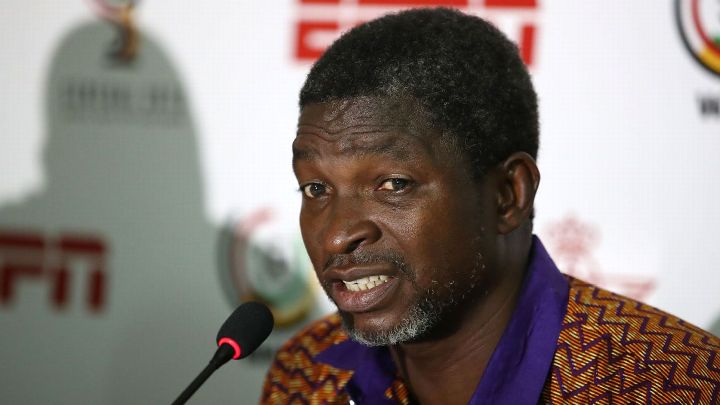 After 570 days without a domestic top flight, Ghanaian football takes a major step in its rebuilding process when the Ghana Premier League returns with a series of fixtures across the country on Sunday.

How did we get here?

Ghanaian football's implosion began on June 6, 2018, when, at Accra's International Conference Centre, the two-hour documentary When Greed and Corruption Become the Norm by undercover journalist Anas Aremeyaw Anas was screened in public for the first time.

The film included a scene revealing Ghana Football Association (GFA) president Kwesi Nyantakyi allegedly taking a $US65,000 bribe from a would-be businessman, and other football officials and referees from across Africa were also implicated.

The expose brought a swift end to former FIFA Council member Nyantakyi's 13-year tenure as GFA president. He promptly resigned after being suspended for 90 days by world football's governing body, despite initial claims of his innocence by the GFA.

"Having regard to the widespread nature of the apparent rot involving top GFA officials, NSA [National Sports Authority] officials, match commissioners, football administrators and referees, the Government has decided to take immediate steps to have the GFA dissolved," Information Minister Mustapha Abdul-Hamid said in a statement.

"It's been very frustrating to go through this period," Asante Kotoko goalkeeper Felix Annan told ESPN, "as football is our job.

"We're just glad that it's coming back and hopefully will be better. We knew for sure that it would resume, but it just took so long."

Nyantakyi was subsequently suspended for life from all football-related activity by FIFA, and he was handed a fine of £391,495 for violation of "art. 19 (Conflicts of interest), art. 21 (Bribery and corruption) and art. 22 (Commission) of the FIFA Code of Ethics," according to a statement published by world football's governing body.

The committee's aims were to end corruption and other criminal activities within the country's football and establish principles of governance and discipline to help return Ghanaian sport to a transparent footing.

The return of the Ghana Premier League this weekend is a tangible consequence of the decision to hand the running of the nation's football to a normalisation committee, even if it required two extensions to its original six-month brief.

The return to a more orthodox system of governance came in October, when the GFA held an election to decide a new president and executive council to appoint Nyantakyi's successor.

"I am really humbled for this unique opportunity," Okraku said after his election. "It's time for us to work, look into the future with hope and build a solid foundation."

The new man certainly has pedigree: He was previously Communications and Marketing manager at Accra Hearts of Oak, has an MBA in football administration from the University of Liverpool and owns Ghana Premier League club Dreams FC.

However, one of his earliest tests was to ensure the swift return of the country's top flight, with only an abridged "Special Competition" having been held since the corruption scandal broke in June 2018.

Initially, in late November, a return date of Dec. 21 was announced for the league, and while that start date was pushed back by a week, there will be few complaints if the new GFA can oversee a successful resumption of domestic football activity.

The consequences of the expose had very human, tragic consequences as well, with journalist Ahmed Hussein-Suale, who was part of the Tiger Eye crew that put together the landscape-shifting documentary, shot dead in Accra in January.

"I expect the police to bring to book, as soon as possible, the perpetrators of this heinous crime," Ghana's president, Nana Afuko-Addo, wrote on his Twitter handle in the aftermath of the murder. To date, no one has faced justice regarding the shooting.

"It's about time we sit down as a country and get the right things done," Asante Kotoko coach Maxwell Konadu told ESPN. "To go back to our roots, to make sure that we're developing and to make sure our youth systems are working.

"We need to do a lot at home currently. We need to improve our infrastructure and to get the right measures in place to help our country's football."

Although the league is set to resume this weekend, running until June 2020, there will be some tweaks to the competition.

Notably, at the GFA Extraordinary Congress, an expansion from 16 to 18 teams was ratified, and the second-tier Division One will feature 49 teams rather than 48.

A serious of familiar faces have returned, with veteran striker Bernard Don Bortey, ex-Aduana Stars captain Godfred Saka and Emmanuel Clottey all signing deals with Accra Great Olympics, who could be a surprise package this term.

The pressure will also be on Asante Kotoko legend Konadu, who returns to the Porcupine Warriors for a second stint as manager, having recently guided Ghana to the final of the 2019 WAFU Cup of Nations in Senegal.

Kotoko might have lost their way under Konadu's predecessor, Kjetil Zachariassen, who left the club in acrimonious circumstances in November, but they remain the favourites for this year's title, despite a disappointing elimination from CAF competitions.

Ghana's most successful club defeated fierce rivals Hearts of Oak on Dec. 22 to win the President's Cup, with Naby Laye Keita scoring the winner at Baba Yara Stadium as Konadu's side set down a marker.

Annan is the league's outstanding goalkeeper, and Emmanuel Gyamfi, Justice Blay and Yacouba Songne are other key players to watch for the title favourites.

Kim Grant's Hearts can take some encouragement from their display in the President's Cup. Expect them to be competing at the top of the table come season's end.

WAFU Cup of Nations star man Joseph Esso has been tipped for a move overseas and would represent a major loss, though Manaf Gumah Jr. has the quality to be one of the league's most eye-catching players in his position.

Four-time champions and former CAF Champions League finalists Ashanti Gold also cannot be ruled out, with Ghana's WAFU Cup of Nations skipper, Shafiu Mumuni, likely to be their star man this term, having been included in the senior Black Stars squad in recent months.

Could there be a surprise package as well?

Ghana Premier League-winning coach Enos Adepah takes over at Karela United, and he will be able to call on the likes of Isaac Hagan in goal and the impressive Nurudeen Abdulai, while Kelvin Boakye-Yiadom could be one to watch this term.

Ghana now hopes its football's darkest period will give way to a brighter future, though Elmina Sharks' Issaka Mohammed has urged caution after such a long period of inactivity.

"It will take time," he told ESPN. "This isn't a one-day job, but I feel good because it's been such a long time without a league in Ghana.

"We're hoping that this season will be one of the best. Time will tell."

Konadu, too, is optimistic, but he doesn't believe the league's 18-month absence was necessary for the country's sport to get back on track.

"[The past 18 months] shouldn't have been the approach," he said. "As a country, we know what is good for our football, and we have the big brains in Ghana who can restructure our system.

"Ghana has lot of talent: playing, coaching, football management. We have the brain power. We must just make sure we rebrand [Ghanaian football], and that we're doing the right things. This is what will help us.

"Football will return to normalcy in Ghana very soon. That's for sure. We're very confident."